Recently, I was able to obtain, test, and evaluate the Arex Rex Zero 9mm compact. The results were good, as the pistol has proven reliable with every load, more accurate than expected, and ergonomically pleasing. The pistol is in some ways based on proven operating principles and the SIG P series handguns, but in other ways offers a fresh pistol from a proven manufacturing base.

The newest Rex Zero pistol, and the subject of this review, is a compact version. The Rex CP represents a lighter and shorter handgun for concealed carry or service use. This handgun will compete with other designs, such as the Glock 19, CZ P01 and the SIG P229. After this evaluation, I can state that the Rex Zero compact need take a back seat to no other handgun. In common with the full-size handgun, the compact is a double-action first-shot high-capacity pistol.

When the hammer is cocked, the hammer may be safely lowered by levering a frame-mounted decock switch downward. This switch or lever is spring loaded and springs back after decocking the hammer. However, the Rex Zero decock lever also performs a second function. The lever acts as a slide lock. In common self-loading pistol fashion, the slide locks to the rear after the last shot in the magazine is fired.

Reload the handgun with a fresh magazine, and press the lever down, to drop the slide. I was first concerned with a combination decock and slide lock. In testing, I tried to actuate the slide lock with heavy pressure after dropping the slide. I was unable to ‘short circuit’ the pistol’s design.

The slide lock, when pressed, only drops the magazine. Release pressure and the lever must be pressed again to lower the hammer. I like this spring loaded combination lever a lot. It is a genuine improvement that results in real speed in manipulation.

The finger accomplishes two things with one lever. This leads to better muscle memory. In the original SIG P series design there was a tendency of shooters to ride the thumb on the slide lock. Some shooters would do so, and the slide would not lock open on the last shot resulting in the shooter dropping the hammer on an empty chamber when he should have been firing or reloading. Some could train out of this problem—others could not. The Rex Zero offers a viable alternative that is actually an improvement.

The Rex Zero also offers an ambidextrous safety. The Rex Zero features a manual safety. This safety is a frame mounted ambidextrous lever I found positive in operation. This safety allows “on safe” carry with the hammer down, with the hammer back, and may be applied during tactical movement. If, like most shooters, you elect to carry the Rex Zero hammer down and safety off, you will find the safety useful during tactical movement.

After firing the first shot, the hammer is cocked. Rather than decock during a critical incident and performing tactical movement and resorting to a long, double-action trigger press, you may simply place the pistol on safe. Personally, I like a pistol with a safety and will carry the Rex Zero 9mm with the safety applied.

The compact version features a .4-inch reduction to the slide and handle (Compared to the Rex Zero 1). The grip frame isn’t just chopped, but rather it is subtly redesigned. The grips offer excellent adhesion with a pebble grain design. There are relief cuts in each grip slab that allow for a shorter trigger reach.

There is a flat area behind the grip on the backstrap where the palm rests that is quite comfortable and allows the palm to ride hard against the gripstrap. The only real trade off with the compact pistol is that the magazine now holds 15 shots compared to 17 with the full-size handgun. A total capacity of 16 cartridges is respectable! 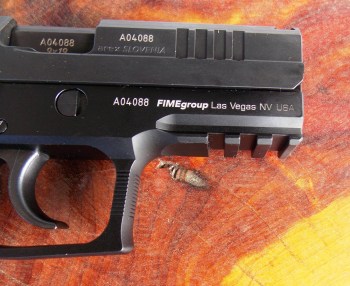 I lubricated the pistol; loaded the two supplied 15-round magazines with Federal American Eagle 115-grain FMJ loads, and proceeded to fire at humanoid-size targets at 5, 7, and 10 yards. The pistol has several good attributes. It is controllable with little felt recoil and a push that is straight to the rear. The sights are good and easily picked up in rapid fire. The sights were properly regulated for 115-grain loads and the six o’ clock hold. The double-action trigger is stiff, but smooth, when properly addressed with a straight to the rear controlled press.

The single-action trigger allows excellent control in rapid fire. I fired 50 rounds of the Federal American Eagle 115-grain FMJ and another magazine of the Federal Syntech training load. There were no failures to feed, chamber, fire, or eject. I tested the 124-grain Federal HST service load also with excellent results.

Previously, I had fired the full-size handgun at 25 yards for accuracy and did the same with the Rex Zero compact. I used a number of new loads and a couple I had used in previous testing of the full-size Rex Zero. A compact 9mm that weighs almost 30 ounces loaded doesn’t kick much.

A few compact handguns are actually more accurate in practical use than the service size pistol for many reasons, including hand fit, although in offhand, the full-size pistol tracked better between targets. The Rex Zero is very close to the service size handgun in accuracy, and equal in comfort in firing.

From a braced barricade, 15 yards:

For most uses, including personal and home defense, the compact 9mm is ideal. I like the crisp single-action trigger of the Rex Zero better than the double-action-only trigger of the polymer striker-fired guns. No need to debate this, you either like one or the other. The Rex Zero is a great handgun that will more than compete against CZ and SIG in the market.